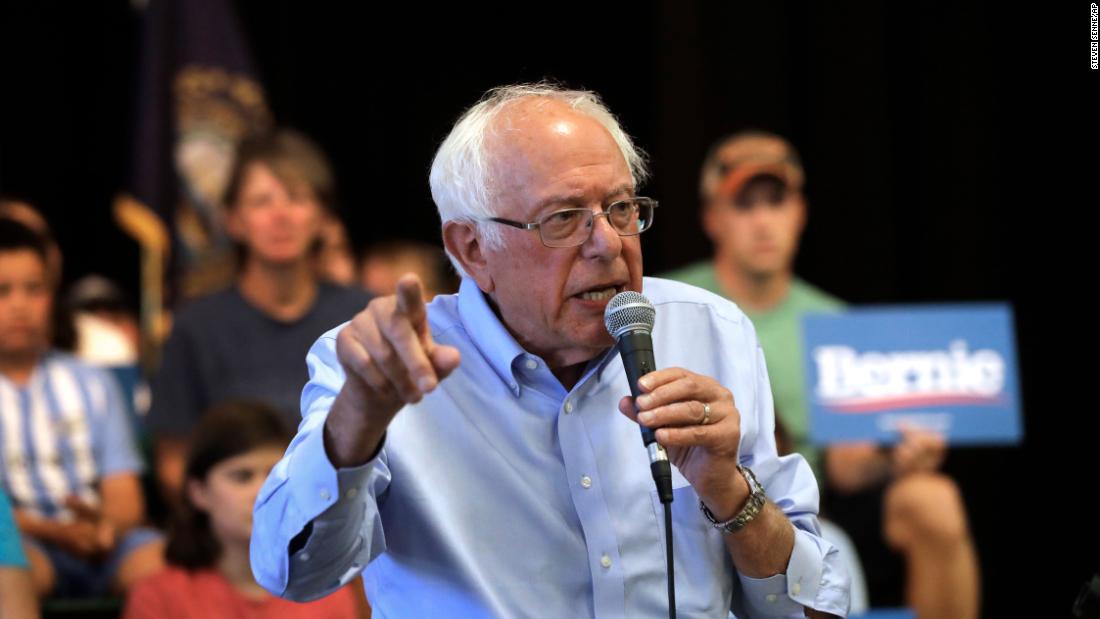 Manchester, New Hampshire (CNN)The Democratic field has flocked to New Hampshire as the first-in-the-nation primary that may be even more pivotal than usual grabs the spotlight for the first time in the 2020 campaign.

The primary is looming as a clash between the senators of New Hampshire’s neighboring states, Vermont’s Bernie Sanders — who thumped Hillary Clinton here in 2016 — and Massachusetts’ Elizabeth Warren.
Their confrontation could help decide which of them gets to carry the dreams of the party’s most progressive voters as the race expands beyond less diverse early voting states.
New Hampshire’s primary could also provide a hope of redemption for Joe Biden should he underperform in the Iowa caucuses. But front-runners mustn’t lose, so it’s possible the former vice president may be face a win or bust scenario here.
If he stumbles, the state could usher alternative moderates like Kamala Harris, Cory Booker or Pete Buttigieg into contention.
As fall approaches, the dominant theme of the primary is already clear: Candidates are learning at town halls, ice cream socials and in their selfie lines that New Hampshire Democrats are taking their responsibility especially seriously this time. The question of electability is palpable as activists fixate on finding the nominee who has the best chance against Trump.

Sanders is the target

Sanders built a movement on being an outsider. But his thumping 2016 victory over Hillary Clinton here — he won 60% of the vote — means he’s the established political power.
The Vermont senator sent a message of intent by blitzing the state over the Labor Day weekend and into the week.
“We take nothing for granted, we are going to work as hard we can, in city after city in this great state,” he vowed, as the sun beat down on a crowd of Sanders devotees in the courtyard at a community college in Nashua on Tuesday.
“We intend to win here in New Hampshire again.”
No one expects Sanders to hit 60% again, especially given that the field may still be unwieldy when New Hampshire votes.
And he may have his hands full with Warren.
Like Sanders, Warren incites a revolt against corporate money’s corrupting influence in Washington. But her willingness to lay bare her own early personal and economic struggles distinguishes Warren from a rival who largely abhors personal storytelling.
“New Hampshire is vital to both in terms of their chances of success,” said Dante Scala, a political science professor and long time primary watcher at the University of New Hampshire.
“It’s hard to imagine a scenario where Warren loses New Hampshire then goes on to win the nomination.”
Sanders’ nationwide support means an early loss in New England is not likely to end his campaign.
“But … obviously he wants to win New Hampshire, too if he wants to win the nomination,” Scala said.
Sanders, thanks to his previous campaign’s grassroots work, has a network of thousands of volunteers and a power base among young and blue collar voters in New Hampshire. He’s making his seventh visit to the state this weekend since announcing his campaign, and has six field offices and 45 paid staff.
“I think we have more volunteers than any other campaigns,” he said, pressing home his advantage while marching in a Labor Day parade in Milford, New Hampshire.
But Warren is building a formidable operation herself, with six field offices in the state. Saturday makes her 16th visit since January.
Her “selfie” lines are becoming an iconic image of a campaign animated by her apparently limitless energy.

Warren’s strong summer means she faces the same question wherever she goes: When will she bust her progressive truce with Sanders?
On Monday, as she huddled away from a rainstorm under a backyard terrace umbrella in Hampton Falls, Warren refused to fray the message discipline that has so far defined her campaign.
“Bernie and I have been friends for many, many years, long before I ever got in politics and I don’t see any reason this should change,” said Warren, peering out from under a “Make Earth Cool Again” baseball cap.
“I get out every day and try to meet as many voters as I can and talk about why I’m in this race, to talk about my vision, to talk about what’s broken, to talk about my plans to fix it.”
“I’m building a grassroots movement to get it done. I think that’s what voters want to hear.”
Her comment is revealing of Warren’s strategy: There’s no need for to attack Sanders or anyone else right now. She’s basking in good press, introducing herself to voters and has a campaign on the rise.
But rivals jealous of her buzz will soon start to more seriously to probe her record and capacity to enact her sweeping policy plans.
Strong showings in Iowa and New Hampshire would confirm Warren as a potential nominee. But failure could doom her hopes of using early contests as a springboard to expand her constituency to minority and working class voters in the South and Midwest.

Biden — never made it to New Hampshire before

Biden is under pressure to quickly ramp up in New Hampshire. As he landed in the state on Friday, the former vice president unveiled endorsements from two former state party chairs, Michael King and Chris Spirou.
After all, neither of his previous presidential campaigns even made it past Iowa. Given that the primary is open to independents, his more moderate message should get a hearing.
A double win in Iowa and New Hampshire could set up a domino effect to wrap up the nomination. A win in either could see him through to the South Carolina primary where he’s strong.
But early state losses could buckle the argument on which he’s built his campaign — that he’s the most likely Democrat to beat Trump. Comments by a senior Biden aide this week were taken as a warning sign in many quarters.
“Do we think we have to win Iowa? No. Do we want to win Iowa? Yes, we do. We think we’re going to win; we know it’s going to be a dogfight. The same thing is true in New Hampshire,” the senior campaign aide said.
The veteran Democrat is currently making his fifth trip to New Hampshire since announcing in April. He has more than 45 staffers in the state and five field offices in addition to his Granite State headquarters.
Biden also isn’t alone in the moderate lane. Buttigieg, for instance, just announced a New Hampshire expansion with 12 new office openings, bringing his total footprint in the Granite State to 56 people.

The one big question

On a balmy Labor Day Eve, Ben Cohen, the ice cream magnate and co-founder of Ben and Jerry’s was bouncing around a stage in the old mill town of Dover.
“Bernie beats Trump! Bernie beats Trump! Bernie beats Trump!” Cohen chanted, drawing smiles from a pro-Sanders crowd.
Cohen is a longtime fan of his fellow Vermont institution, but his histrionics revealed a key dynamic in New Hampshire.
The primary is marinating in national themes — an economy weighted toward the rich, health care and college costs and debt and climate change. And candidates are careful to note flaring local concerns, including the opioid crisis.
But the shock of Trump’s presidency has concentrated minds of Democratic activists who are considering the relative chances of each candidate of beating him.
Sanders cites match-up polls showing him beating the President in his events — though other candidates tend to do just as well.
He brandishes his whopping win here in 2016 and the resonance of his ideas ever since — like his campaign to raise the minimum wage — as proof his self-described socialism is not the recipe for a general election disaster his critics think.
“I want to thank the people of New Hampshire very much. When I came here four years ago, many of the ideas I that talked about were described by the media … the political establishment as radical ideas. Yet four years later, many of those ideas are now mainstream, and are supported by many of my Democratic opponents,” Sanders said in Nashua, echoing other stops elsewhere on the campaign trail.
Warren parries similar questions about nagging fears that after Clinton’s loss in a brutal campaign against Trump, a safer choice might be a white, male, traditional candidate.
Posing the first question at Warren’s Labor Day event that drew 800 people, liberal activist Linda Rhodes hit on the most existential question facing her campaign.
“One of the things that concerns me is when I talk to friends and family and people all over the country they say, ‘I love Elizabeth Warren. We love her policies, but can she really beat Donald Trump?'” Rhodes said.
Warren’s answer was for her entire campaign: “How about we start with I know how to fight and I know how to win? Yeah!”
“I think what’s going to carry us as Democrats is not playing it safe. It’s not pretending that everything was just fine and then here’s this one problem and we get rid of that one problem, it’s all going to work out. Because it’s not. It’s not.”

Its About Helping As Many Men And Women As Possible To Regain Their Confidence, Their Beauty, Their Ultimately Their Health[...]
Read More
⇛ view similar products
Hair Loss Protocol - Video

Its About Helping As Many Men And Women As Possible To Regain Their Confidence, Their Beauty, Their Ultimately Their Health[...]
Read More
⇛ view similar products
Wp Social Widget V2

Now, With Just A Few Clicks Of Your Mouse You Can Add Effective Social Widgets To Your Wordpress Blogs And Tap Into MORE Social Tr[...]
Read More
⇛ view similar products
Draw Cars Fast And Easy

Learn how to draw cars using our step by step tutorials. Sports cars, classic cars, imaginary cars - we will show you how to draw [...]
Read More
⇛ view similar products