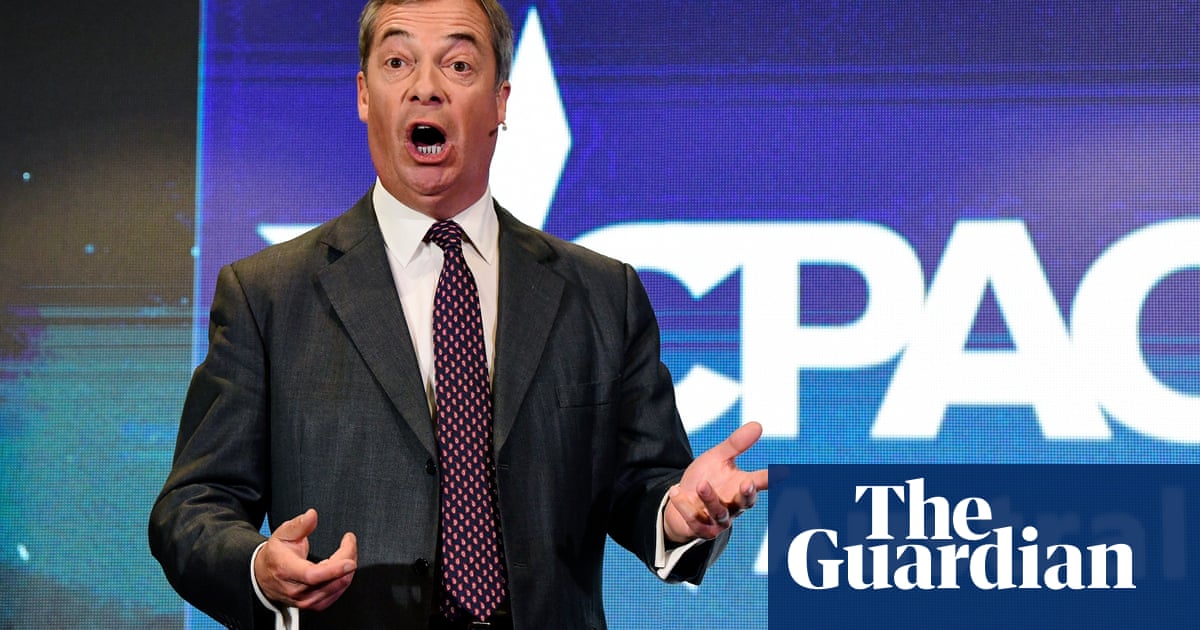 Nigel Farage has derided the Duke and Duchess of Sussex for their irrelevant social justice and environmental campaigns while abusing Prince Charles and describing the late Queen Mother as an overweight, chain-smoking gin drinker, in an incendiary speech to an Australian rightwing political conference.

Farages speech to Sydneys Conservative Political Action Conference from which media were barred ranged across his views on Brexit, media bias and the United Nations, but he reserved his fiercest condemnation for members of the royal family, including princes Charles and Harry, and the Queen Mother.

The Brexit party leader was laudatory about the Queen an amazing, awe-inspiring woman, were bloody lucky to have her but abused her son, grandson and mother.

Later, in response to a question about women choosing not to have children because of the climate crisis, he commented on Harry and Meghans decision to have only two children.

Terrifying! Here was Harry, here he was this young, brave, boisterous, all male, getting into trouble, turning up at stag parties inappropriately dressed, drinking too much and causing all sorts of mayhem. And then, a brave British officer who did his bit in Afghanistan. He was the most popular royal of a younger generation that weve seen for 100 years.

And then he met Meghan Markle, and its fallen off a cliff. Weve been told in the last week that Meghan and Harry will only have two children and were all completely ignoring, the real problem the Earth faces, and that is the fact the population of the globe is exploding but no one dares talk about it, no one dares deal with it, and whether Prince Harry has two kids is irrelevant given there are now 2.6 billion Chinese and Indians on this Earth.

Farages reference to dressing up inappropriately is an allusion to photographs of Harry at a 2005 party dressed in a Nazi uniform. Harry is now sixth in line of succession to the British throne, behind all of Prince Williams children, and will not automatically follow his brother to the regency.

The Guardian has heard a recording of part of Farages speech in which the Brexit party leader is laudatory about the Queen while abusing her relatives. While not on the recording, other media outlets have reported that Farage described Harry as the prince of wokeness. Guardian Australia has spoken to sources who said they had heard the comment, but others who said they werent sure or that they had not heard it.

Farage has previously canvassed his disdain for some members of the royal family.

In 2008 he was the sole MEP who refused to applaud a speech on the climate crisis by Prince Charles, later saying the princes advisers were naive and foolish at best. After Charles argued for greater legislative powers for the EU he wrote: I seldom agree with Prince Charles I do not think it is appropriate for the heir to a constitutional monarchy to want to take power away from his mothers government.

Farage was introduced to a partisan Sydney crowd of about 500 on Saturday as quite possibly the next British prime minister despite not being a member of the UK parliament, and having failed seven times to be elected as an MP.

He told his Australian audience greenies have taken over this country, and condemned the deposed prime minister Malcolm Turnbull as a snake.

Farage said of Turnbulls successor, Scott Morrison, who unexpectedly won a general election in May: Youve now got someone conservative, mainstream media [and] those in the middle of Melbourne and Sydney may not like him but out where real people live, they voted for him.

Essentially, The Lost Ways is a massive COLLECTION of knowledge by EXPERTS in their various fields about The Lost ways of our GREA[...]
Read More
⇛ view similar products
What Every Survivalist Should Know

Essentially, The Lost Ways is a massive COLLECTION of knowledge by EXPERTS in their various fields about The Lost ways of our GREA[...]
Read More
⇛ view similar products
Downloadable ford manuals

Watch the video and learn how to use tiny little text messages sent from the cell phone you have in your pocket right now to crawl[...]
Read More
⇛ view similar products
Text Your Ex Back

Watch the video and learn how to use tiny little text messages sent from the cell phone you have in your pocket right now to crawl[...]
Read More
⇛ view similar products