Anyone who is interested in building a more equitable and just world is a part of the Squad, Congresswoman Ayanna Pressley said 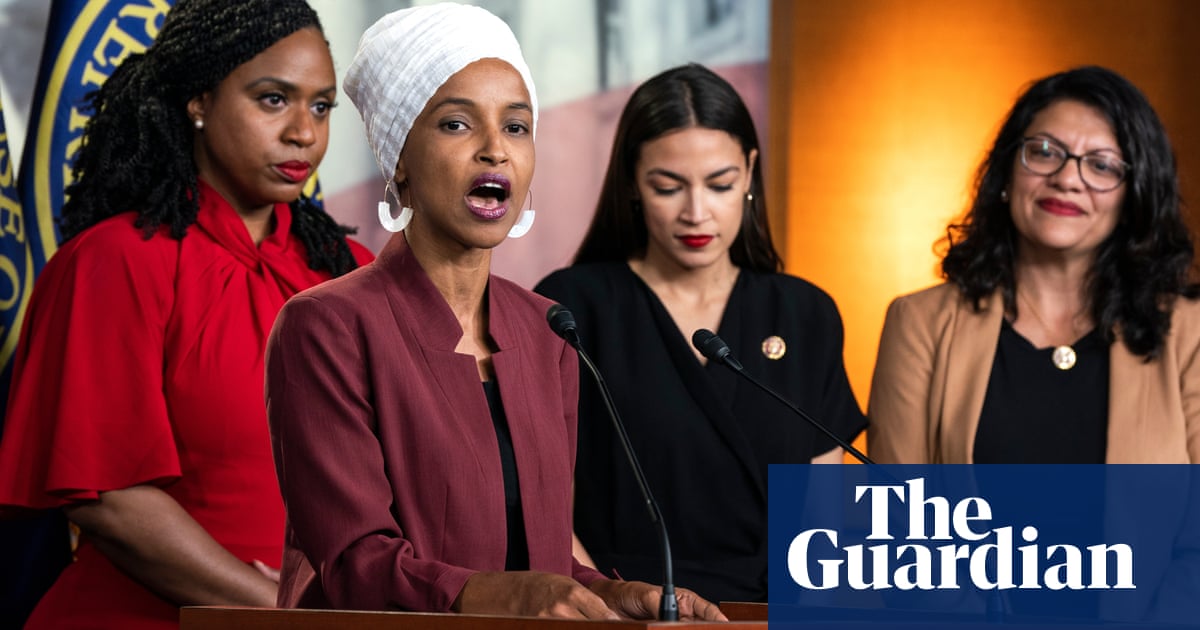 Four progressive democrats known as the Squad have revealed the source of their fierce moniker they gave it to themselves at a photo shoot.

Someone said, Oh you should do a hashtag or something #squadgoals and then it morphed into whole other thing, Congress member Ayanna Pressley told CBS This Morning on Wednesday.

Its not just about dismantling were also intentional about building and fostering, the Massachusetts congresswoman explained. The reality is anyone who is interested in building a more equitable and just world is a part of the Squad.

Coming just hours after a House resolution condemned Donald Trumps tweets as racist, the Squad used the interview with anchor Gayle King to renew their criticisms of the president but also their own Democratic House speaker, Nancy Pelosi.

The Michigan legislator Rashida Tlaib called Trump the biggest bully Ive ever had to deal with and described his tweets about her and fellow representatives and members of the four-strong Squad, Alexandria Ocasio-Cortez of New York, Pressley and Ilhan Omar of Minnesota, as a distraction created by a bully.

Im dealing with the biggest bully Ive ever had to deal with in my lifetime and trying to push back on that and trying to do the job that we all have been sent here to do, Tlaib said.

This is a distraction, Tlaib added. This is a person that really wants to vilify, demonize, not only immigrants, but even communities of color.

Tlaib challenged Pelosi to call the Squad members to a meeting.

She is speaker of the House. She can ask for a meeting to sit down with us for clarification, Tlaib said. She also called on Pelosi to acknowledge that they are women of color.

But the CBS host Gayle King also challenged Pressley over her description of Trump as the occupant of the White House.

I call him that not because I dont have respect for the Oval Office, Pressley said, describing Trump as only occupying the space.

He does not embody the principles, the responsibility, the grace, the integrity of a true president, Pressley told King. Im not dishonoring the office. He does every day.

Over the weekend, Trump was widely condemned for saying the four progressive members of the Squad, should go back to the crime infested places from which they came. Critics were outraged by the racist trope. Omar came to America as a refugee and soon became a US citizen, the other three women were all born in the US.

On Wednesday, Trump tweeted remarks made by the Louisiana Senate Republican John Kennedy, calling them the four horsewomen of the apocalypse and wack jobs.

Trumps series of racist remarks made in tweets and remarks at the White House since Sunday have drawn much domestic and international condemnation, including from the prime ministers of the UK and Canada.

But only four Republicans joined the House Democratic effort to condemn the presidents use of racist language, in a vote on a resolution on Tuesday evening.

The resolution fells down party lines, with 240 Democrats in favor and 187 Republicans opposed.

Asked if Republicans had done enough to condemn the presidents remarks, Ocasio-Cortez told CBS: Absolutely not.

But Ocasio-Cortez also said there was no fundamental fracture between progressives and moderates.

Inside This Unique Publication You Will Discover And Benefit From The Many Opportunities Obama's Destruction Of America's Financia[...]
Read More
⇛ view similar products
How To Get Secure Future For Your Child

This Handbook Was Designed To Prepare You Quickly And Effectively For Family Court Services (fcs), Child Custody Mediation, And/or[...]
Read More
⇛ view similar products
How To Get Secure Future For Your Child

If You Want To Build A Massive Deadlift While Piling Massive Slabs Of Muscle On Your Shoulders, Traps, Arms, And Back Then You Nee[...]
Read More
⇛ view similar products
A Manual For Deadlift Domination

If You Want To Build A Massive Deadlift While Piling Massive Slabs Of Muscle On Your Shoulders, Traps, Arms, And Back Then You Nee[...]
Read More
⇛ view similar products