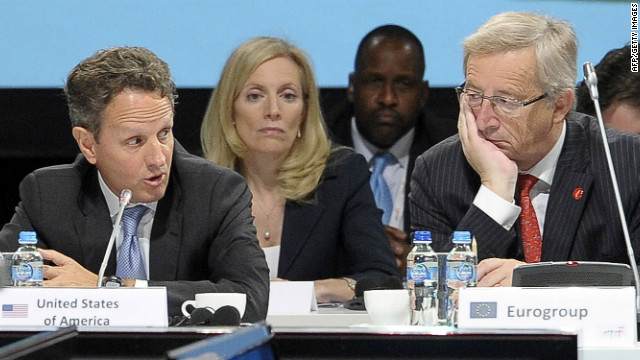 Here is a look at the life of former US Treasury Secretary Timothy Geithner.

Birth place: New York, New York
Birth name: Timothy Franz Geithner
Father: Peter Geithner, international development official
Mother: Deborah (Moore) Geithner
Marriage: Carole (Sonnenfeld) Geithner (June 8, 1985-present)
Children: Elise and Benjamin
Education: Dartmouth College, B.A., 1983; Johns Hopkins, M.A., 1985
Other Facts:
Spent several years of his childhood in Africa and Asia, including Zambia, India and Thailand.
Very athletic and enjoys fly-fishing, skiing, basketball and other sports.
Member of the Group of Thirty Consultative Group on International Economic and Monetary Affairs, Inc.
Timeline:
1985-1988 – Works at Kissinger Associates, an international consulting firm.
1988-2001 – Works at the Department of the Treasury.
1988-1989 – International Economist for the Treasury.
1989-1990 – Assistant to the US Financial Services Negotiator.
1990-1991 – Assistant Financial Attaché.
1991-1992 – Special Assistant to the Assistant Secretary for International Affairs.
1992-1994 – Special Assistant to the Under Secretary for International Affairs.
1994-1997 – Deputy Assistant Secretary for International Monetary and Financial Policy.
1997 – Senior Deputy Assistant Secretary, International Monetary and Financial Policy.
1997-1998 – Assistant Secretary for International Affairs.
1998-2001 – Undersecretary for International Affairs.
2001- Appointed senior fellow at the Council on Foreign Relations.
2001-2003 – Director of Policy Development and Review at the International Monetary Fund.
November 17, 2003 – Named president and CEO of the Federal Reserve Bank of New York. In this position, he is also the vice-chairman of the Federal Open Market Committee.
2003-2009 – President and CEO of the Federal Reserve Bank of New York.
November 24, 2008 – Nominated by US President-elect Barack Obama to be secretary of the Treasury.
January 26, 2009-January 25, 2013 – Secretary of the Treasury. Confirmed by the Senate, 60-34.
August 7, 2011 – The Obama administration announces that Geithner plans to remain Treasury secretary through the fall of 2012.
January 25, 2013 – Steps down as Treasury secretary.
February 2013 – Returns to the Council on Foreign Relations as a Distinguished Fellow.
March 2014-present – Works in the private sector as president of Warburg Pincus, a private equity investing firm.
May 12, 2014 – Geithner’s book “Stress Test: Reflections on Financial Crises” is published by Random House.

Get Paid To Write Articles and Stories- Thousands of topics to write about. Help Improve Books and Movie Scripts. Get Cash For[...]
Read More
⇛ view similar products
Overcome Overwhelm Masterclass For Moms

Do you feel overwhelmed, anxious or even at the end of your rope? Learn how to regain control of your life and emotional well-bein[...]
Read More
⇛ view similar products
Overcome Overwhelm Masterclass For Moms

Do you feel overwhelmed, anxious or even at the end of your rope? Learn how to regain control of your life and emotional well-bein[...]
Read More
⇛ view similar products