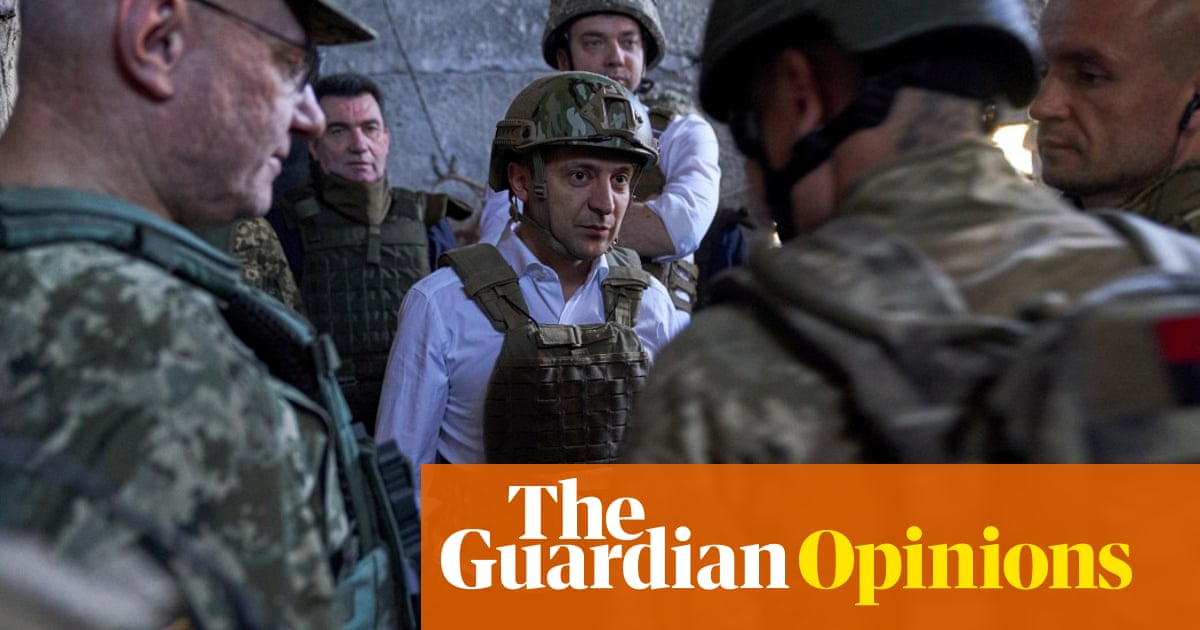 At a press marathon in Kyiv last week, Volodymyr Zelenskiy declared that his mission was to be the Ukrainian president who would end the war. Thats a tough ask for a former comedy actor who had barely got his feet under the presidential desk before being snarled up in a Donald Trump impeachment scandal that has led some Ukrainians to refer to their leader as Monica Zelenskiy.

Ukraines war is rightly Zelenskiys priority, having now claimed more than 13,000 lives since 2014 when demands for greater territorial autonomy in Donetsk and Luhansk collectively known as Donbass escalated into a separatist crisis with Russia supporting the separatist rebels.

But given the immense scale of the task before him, Zelenskiy desperately needs his allies in the west and the public at home to be united. Unfortunately, interest in the situation among his European allies is waning, and given both the political fiasco in Washington and the resurgence of public protests in Kyiv, Ukraine is once again at risk of becoming the victim of geopolitics.

The fallout from Zelenskiys involvement in the Trump impeachment saga is an unwelcome distraction for him. It came as a result of a phone call with the US president in July. The call triggered a leak from a whistleblower, claiming that Trump had temporarily withheld military aid to Ukraine as a way to pressure Zelenskiy to launch an investigation into Joe Bidens son, Hunter, and his involvement with Burisma, a Ukrainian gas company. Zelenskiy repeatedly denied being pressured to launch the investigation, and even said that he was unaware that the military aid had been held up in advance of the call.

Now his unprecedented 70% trust rating among Ukrainians is at risk. The published transcript of the sycophantic phone call with Trump didnt help, generating the Monica Zelenskiy taunts.

Ukrainians are also, by now, seasoned street protesters. The country has recent experience of two periods of mass mobilisation, one during the Orange revolution in 2004, and the second in 2013-14, which became known as the Euromaidan, which subsequently plunged the country into the ongoing bitter war in Donbass.

Some 10,000 people gathered in Kyiv to protest after the president announced he would consider implementing the so-called Steinmeier process to try to end the war. The formula, put forward by Germany and France, who have been mediating to end the conflict peacefully, would allow for local elections to be held in the Donbass territories occupied by Russia, but under Ukrainian legislative rules and the supervision of the Organisation for Security and Co-operation in Europe (OSCE). All armed groups would first have to leave the area and Ukraine would have to regain control of the territory.

The sensitivity of the topic, and the likely presence of far-right and anti-Kremlin groups among protesters, increases the possibility of violence brewing. Although aware of the discontent that his decision has caused, the president has downplayed the risk of escalation because there is such a public clamour to end the war. There is, however, no agreement on how to do so. At the same time, Zelenskiy stressed that he understood the protesters concerns and emphasised that if Ukraine could not control the border with Russia, he would seek an alternative to the Steinmeier formula.

Zelenskiy has a lot to prove if he is to be taken seriously as a leader. A squeaky-clean image is especially important to him, given that he came to power on the promise of delivering a complete break with the political elites of the past. He has been fending off allegations of ties to the Dnipropetrovsk oligarch Ihor Kolomoisky, whose TV channel hosted Zelenskiys show, and now the fiasco in Washington is further undermining his brand.

The war in Donbass has been costly for Ukraine. To that end diplomatic, economic and military support from the US and Europe have been crucial to the country. But as the war drags into its sixth year, both the US and some of Ukraines European allies seem to have lost the original momentum behind their support. This puts Ukraine in a difficult position.

Zelenskiy has reason to question the continued commitment of Ukraines European allies when it comes to sanctions and continued pressure on Russia. Of particular concern is the construction of the Nord Stream 2 natural gas pipeline from Russia to Germany. If gas can be delivered straight to Germany without going through Ukraine, there will be much less reason for Germany to remain as committed as it once was to putting pressure on Russia. French condemnation of Russia for its actions in Ukraine also seems to have lost any gusto. President Emmanuel Macron has even suggested intensifying economic and security cooperation with Russia in order to build Europe from Lisbon to Vladivostok.

And even if Joe Biden managed to defeat Trump for the White House the US would not necessarily become a more active player in helping to bring peace to Donbass. Much like Trump, Biden is using Ukraine as a chess piece in his presidential campaign and the impeachment proceedings. He was quick to demonise Trump for temporarily withholding military aid to Ukraine, but back in 2014 the ObamaBiden administration refused to provide Ukraine with the same aid. The future of any continued assistance to Ukraine would therefore be unclear under his watch.

Although Ukraines western allies might be distracted and support is potentially waning, Zelenskiy needs to retain strong backing at home to avoid potential unrest from bubbling up within the country. The prospects for peace also greatly depend on Ukraine successfully controlling its border with Russia. Zelenskiys ability tomaintain the appearance of a strong and serious leader capable of delivering peace is already being sorely tested by the fallout from the Trump affair. Without a clear way forward, the bar seems too high for him to be able to make good on his promise.

I Cured My Yeast Infection

Beat Tooth and Gum Disease Now - Keep Healthy Teeth For Life While Saving Dental Dollars With Over 200 Pages This Is No Skimpy R[...]
Read More
⇛ view similar products
How to Attract the Perfect Guy

The Get A Great Guy Guide is just the thing you need to achieve the breakthrough that you've been waiting for. With its sensible,[...]
Read More
⇛ view similar products
How to Attract the Perfect Guy

The Get A Great Guy Guide is just the thing you need to achieve the breakthrough that you've been waiting for. With its sensible,[...]
Read More
⇛ view similar products